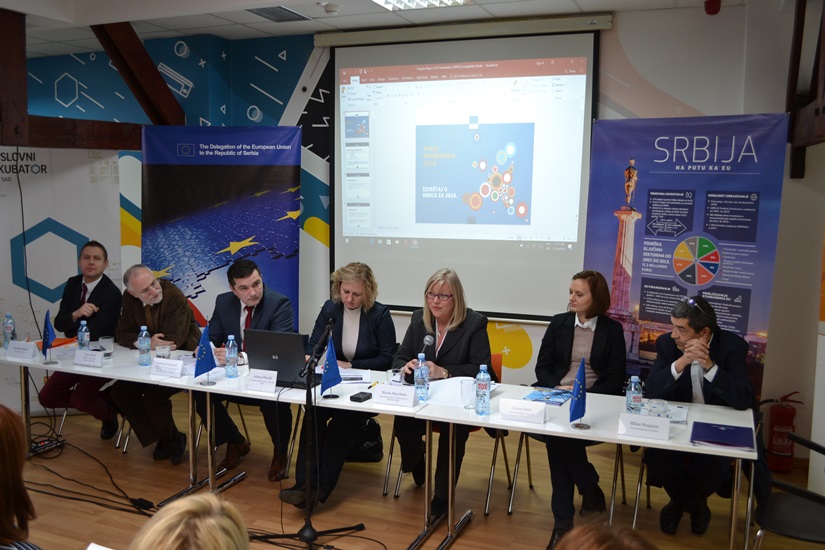 Nebojša Vojnović, the Undersecretary of the Provincial Secretariat for Regional Development, Interregional Cooperation and Local Self-Government, attended the presentation of the European Commission’s Serbia Progress Report for 2016 that was held in the Business Incubator Novi Sad on 24 November 2016.

As the Undersecretary Vojnović stressed at the occasion, development priorities aimed at European integrations had been defined, he also mentioned that it has been necessary to motivate local self-governments’ representatives to work on improving their efficiency with the view to strengthening local self-government capacities in the area of regional development.

– Pursuant to the new Law on Financing Local Self-Governments, income tax budget allocation for the municipalities and cities shall be reduced, and in order to compensate for that, they should turn to external funding sources by means of project activities within the IPA funds and other funds available to us in the process of the European Union accession, and the line Secretariat will provide support to them in that regard – stated the Undersecretary Vojnović.

– We have been particularly satisfied with a part of the Report that pertains to the negotiating chapter 23, about the fact that Vojvodina has maintained a high level of national minorities’ protection. Even though our Secretariat’s representatives are not formally members of the negotiating group for chapter 22, they have actively participated and have been informed of the activities coordinated by the Republic of Serbia European Integration Office – stressed the undersecretary Vojnović.

The European Commission’s Report was presented by Noora Hayrinen, Head of Political Section of the EU Delegation to Serbia, who stated that the most significant elements of the Report pertained to the rule of law and economic development.

– Serbia has achieved a significant progress in the EU accession process, for it has carried out an ambitious plan of political and economic reforms, and also due to the fact that it has undertaken very constructive role in migration management, which may serve as a good example to many member countries – Ms Noora Hayrinen pointed out.

According to Ms Noora, the main progress has been achieved in the public administration reform and implantation of economic reforms and fiscal consolidation, and it is necessary to focus more on the current situation, not only on the annual progress.